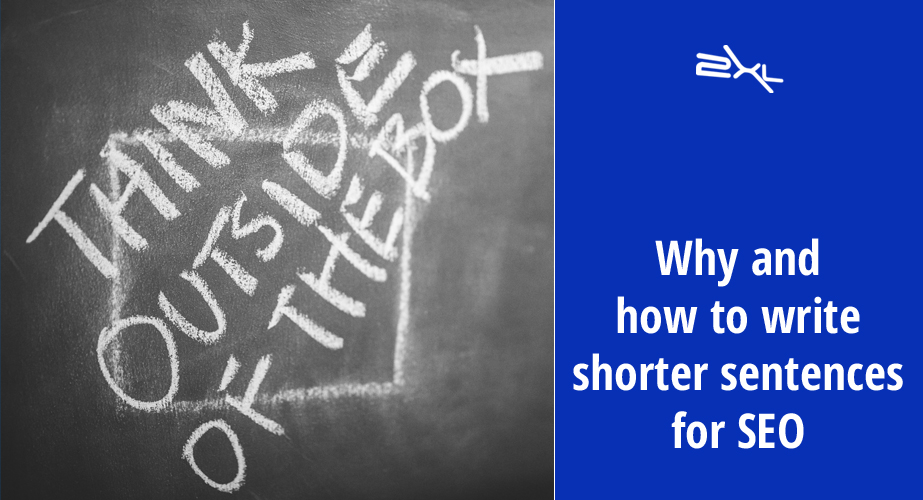 Why shouldn’t you use too many long sentences?

Although it was clear that Brian had listened intently when it was explained to him what he should do and he had actually followed most of the instructions exactly as the instructor had written down for him on the sheet of paper to make sure he would remember them, he had added the packet of sugar which was already on the kitchen counter rather than the vanilla extract which he actually should have used which was still in the kitchen cabinet because he had forgotten that the instructor had told him to always put every ingredient on the kitchen counter in advance to make sure he wouldn’t forget anything, which completely ruined the recipe as it was that very same vanilla that gave the dessert its distinct flavor.

Phew, are you still there? Did you notice your mind wandering off mid-sentence? Mine sure did. If yours did too, that’s because it’s difficult to process information that isn’t structured. Before you can wrap your head around the information, a new piece of information is already vying for your attention. That’s actually a big reason why we use periods. Periods actually say: “OK, this is the end of what I want to say, let that sink in before you continue”. Let’s rewrite this passage with shorter sentences.

Brian had listened intently when it was explained to him what he should do. He had actually followed most of the instructions exactly as the instructor had written them down for him on the sheet of paper. The instructor had wanted to make sure he would remember them. But Brian had made a big mistake. He had added the packet of sugar which was already on the kitchen counter. Actually, he should have used the vanilla extract. The extract, however, was still in the kitchen cabinet. After all, he had forgotten that the instructor had told him to always put every ingredient on the kitchen counter in advance. This would’ve helped him remember. The different sugar ruined the recipe. It was the vanilla extract, after all, that gave the dessert its distinct flavor.

This fragment is a lot easier to read and more engaging. Shorter sentences make it easier to get your message across. And make no mistake: this is true for more advanced readers as well. We’ve lost count of the number of people who have ignored our advice because they are “writing for a sophisticated audience”. It doesn’t matter. Clear and concise writing benefits everyone. Your content can be as complex as you want it to be. Your writing shouldn’t. Period.

Using shorter sentences makes your text easier to read. And, readability is important for SEO. It makes sense if you think about it. Google likes to show (and people like to find and share) high-quality content, which is informative, nice to read, and easy to comprehend. As the example you’ve just read demonstrates, long sentences are more difficult to process. If a long sentence is followed by other long sentences, the reader might fail to understand the meaning of a text completely. That’s not the experience you’d like to give to your visitors. Nor does Google!

What makes a sentence too long?

There is no hard rule as to when a sentence is too long. Sometimes, you need to write short sentences, sometimes a longer sentence is the best option. In any case, you shouldn’t use too many long sentences. On average, they are more difficult to read. Readers tend to stop reading texts with lots of long sentences earlier.

We’ve decided to use a rule of thumb for the sentence length check in our plugin: you shouldn’t have too many sentences longer than 20 words. Granted, a very complex sentence with 18 words can be more difficult to read than a more simple sentence with 22 words. Moreover, research shows it’s also important to vary. That’s you should use common sense when optimizing your text. But in general, using shorter sentences helps you get your message across, especially online.

How to shorten your sentences

Writing shorter sentences can be a challenge. When we check assignments in our SEO copywriting course, we notice it boils down to one problem. Many writers tend to put too much information into one sentence. Just because thoughts are related, doesn’t mean they should all be in the same sentence. Consider each separate idea within a sentence and break up your sentence into shorter ones. Then, connect the sentences using transition words.

Example: Although it can be a challenge to write shorter sentences, it’s really important to do so, because it makes your sentences easier to read, even if it requires a little more effort.

Revised example: It can be a challenge to write shorter sentences. Still, it’s really important to make an effort to do so. After all, it makes your sentences easier to read. It’ll be worth your while!

If you do this, make sure you’re not creating fragments. Fragments are incomplete sentences. Every sentence should have a subject and a verb and should be completely readable on its own. The second sentence in the example below is a fragment, because the subject (a mistake), doesn’t have a corresponding verb.

Example: One of the risks you can run into is that you start writing fragments. A mistake people often make when trying to make their long sentences shorter.